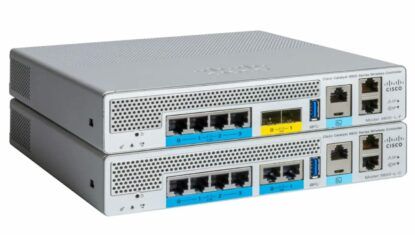 It makes it easy to create location-specific configurations and assign different configurations to different groups of APs. With OfficeExtend Access Point (OEAP) functionality, the controller can provide mobile workers and micro-offices with convenient access to the organization’s resources. They can work safely in the organization’s network from home or in a micro-office without the need to set up VPN connections.

The unit’s performance can be enhanced with the Performance license. With this license, the controller provides up to 10 Gb/s bandwidth and supports connection with 500 access points and 10 thousand clients. Cisco Wireless Intrusion Prevention System (WIPS) enables advanced detection, location, and prevention functions, as well as eliminates intruders and malicious action sources from the network.

It constantly monitors the wireless network, detects occurring anomalies, unauthorized accesses, and attacks on the radio band in use. Cisco Catalyst 9800 also utilizes Cisco Trustworthy Solutions, which means that their hardware components and software are verified pre-launch. It protects against loading up non-original or modified software or using modified systems or modules.

The Cisco Systems wireless network is suitable for handling locations hosting a large number of users, such as office spaces or conference rooms. They work well for handling numerous sensors and IoT devices, as well as a great number of voice calls and video calls. They also support the latest IEEE standard 802.11ax and Wi-Fi 6. These standards take wireless networks to a whole another level, where they can be used concurrently by many devices at the same time.

Cisco Catalyst 9800 controllers are well-adapted to the rising requirements of Internet of Things support. Besides IEEE 802.11ax (Wi-Fi 6), they also support additional extensions for IoT devices. These include Bluetooth/BLE (Bluetooth Low Energy) and IEEE 802.15.4 (LR-WPAN) used for resource tracking or route searching, among others. They also support protocols used by IoT devices, such as ZigBee or Thread that are utilized in building automation systems or lighting.

The controllers are available in two versions:

The unit supports a range of protection mechanisms, such as Secure Boot, Runtime defenses, integrity verification, and hardware authenticity verification.